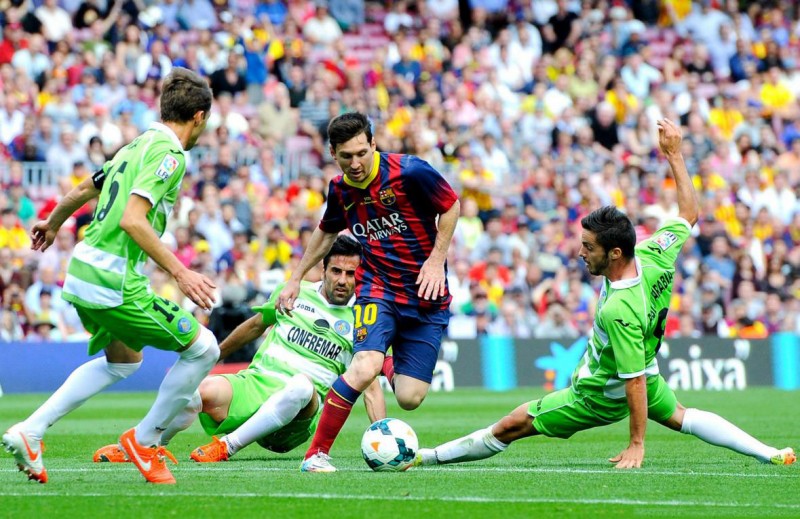 After the extraordinary performance of Barcelona against Juventus earlier this month — where Lionel Messi was again a key player — we now know the real truth about Messi: He not only is the best soccer player of this era, but probably of all time.

Although Barcelona fans consider him almost like a God, he has reached a point in which no adjectives are enough to describe him. Jose Delbo, a noted Argentine artist told me recently, comparing him to Cristiano Ronaldo, “Ronaldo is a great player, but Messi is a magician.”

How else can one describe Messi’s performance against Bayern Munich, when his dribbling was so fast that he left the German defender Jerome Boateng stretched over the soccer field before sending the ball over Manuel Neuer’s head, arguably the best goalkeeper in the world, directly inside the net?

As Zito Madu wrote admiringly in SB Nation after that game, “This Lionel Messi bad-boy phase has gone too damn far now. First the tax fraud, then the tattoos and now the public dismembering of a human being. Evil Messi does not care for silly things like human decency. This is in violation of so many treaties in the Geneva Conventions.”

What can one say about Messi’s performance in the King’s Cup in Spain when Barcelona played the final game against Athletic Bilbao and scored one of the best goals of all time? Messi took the ball on the right flank and dribbled by four defenders before scoring with a low shot past Bilbao’s goalkeeper Iago Herrerin. Those watching the game were speechless.

David Konzevik, a famous Argentine economist and a former soccer player thus explains Messi’s goal: “Messi’s goal was more than exciting. One felt that it was a unique moment, like Maradona’s goal against the English. When he started that play, there was more suspense in the soccer field than in a Hitchcock film. They were only seconds, but we were all in suspense waiting for the outcome. That does not happen with any other player. We saw the lightning first run and then came the thunder of the goal. Pure genius.”

What is Messi’s secret? Johan Cruyff, a soccer legend, explains. “The secret,” he says, “is the speed of his change of pace; Messi changes direction every half meter. When the defense takes a step he has taken two in two different directions. His dominion of the space-time relationship is skillful, always starts first and this allows him not to be caught.”

Marcelo Vieira, the great Brazilian player adds, “It is a very rare thing. I do not know how to explain it. Messi goes one, two, three. I do not know what he does, how he handles the ball. You do not stop him by kicking him.” When Barcelona beat Juventus 3-1 in the Champions League final game, and although he didn’t score during this game, Messi was again a key player for his team.

Perhaps the greatest explanation for Messi’s achievements was provided by the late Uruguayan writer, Eduardo Galeano, author of the book “Soccer in Sun and Shadow”: “I think Messi is unique in the history of mankind, because he is someone able to have a ball in the foot. They always say that Maradona had the ball tied to his foot, but Messi has it inside the foot, and that is scientifically inexplicable. You see him persecuted by 7, 11, 22 rivals trying to get the ball and there is no way to get it out his foot. Why is this so? Because they are seeking the ball outside Messi’s foot, but the ball is inside him. Now how you can fit a ball inside a person’s foot? It is an incomprehensible phenomenon, but it’s true, Messi carries the ball inside, not outside his foot,” Galeano concluded.

One may attempt different explanations for his talent but one thing is certain: Messi is one of the greatest soccer players of all time, a true glory to the game.

Cesar Chelala is a New York writer born in Argentina.

SPECIAL TO THE JAPAN TIMES