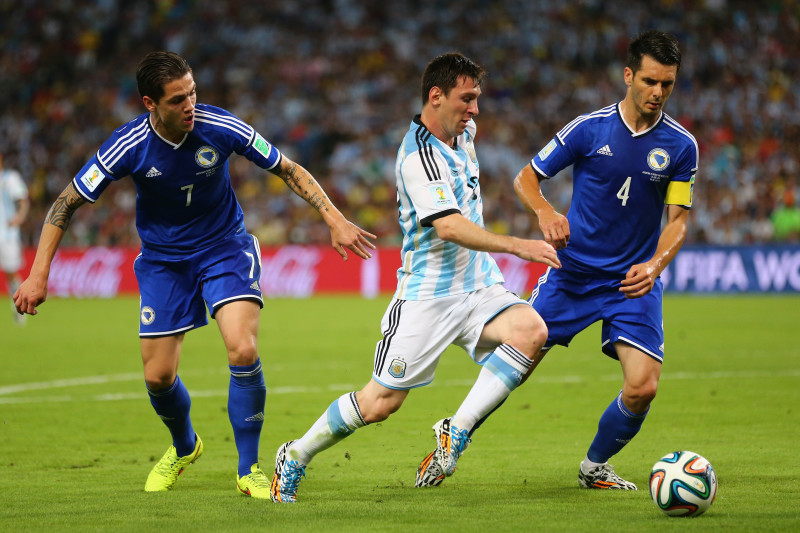 By coachkwaku@gmail.com   |   December 25, 2022
Comments Off on The Sports Science Behind Lionel Messi’s Amazing Dribbling Ability

Lionel Messi may have been scientifically destined to be the greatest dribbler of a football.

This is a bold statement, I know, and I imagine many Brazil fans are already taking to their keyboards to protest, citing Garrincha and Pele. But looking at the smaller and lighter frame of the Argentinian, it’s clear to see that he’s practically been custom-built for speed, agility and balance.

Biomechanically, you’d struggle to create anything much more perfect in the lab.

Secondly, it’s the way he has honed and refined his own distinct style of play to suit his particular skill set and stature in an era often dominated by footballing giants.

Yes, granted, Pele is one of the most celebrated players in the sport’s history—and deservedly so—but he didn’t play during a time of advanced sports science. A time when players are transformed into bigger, stronger and scarier versions of themselves, like Gareth Bale and David De Gea, the latter observed in a report from the Express.

Messi basically had to become a prolific dribbler. He wasn’t going to “muscle” his way through a team’s defence so instead he learned to glide through it. If you watch the below video montage, the words “knife” and “butter” spring to mind.

So how did he do it? Is his dribbling ability innate and genetic? Or is it something you can learn? If it’s the latter, can sports science decode Messi’s abilities and create a blueprint to produce a team of dribbling phenoms? The answer—as you’d expect—is a little complicated, but the insight is fascinating.

No article concerning Lionel Messi’s athletic ability would be complete without first addressing the nature vs. nurture debate. This is because it’s well documented Messi was told at a young age he was “too small to play” football, as reported in the Mirror. It was believed to be due to “hormonal problems,” and leading medical professionals believed “he would grow no taller than 4’7″.”

Now, consider research published in the British Journal of Sports Medicine states: “Within the field of sports science, elite performance is understood to be the result of both training and genetic factors.”

This means Messi developed as a young player while being dramatically handicapped by “genetic factors.” Far smaller and physically less mature than his team-mates, it could be argued the “training” aspect of his development compensated—and thrived—in view of his genetic disadvantage.

Therefore, in theory, the strange circumstances under which he grew up could have played a pivotal role in producing a dribbling maestro; skill, stamina, balance, speed and agility all dramatically improving only to then be chemically enhanced by hormone treatment that helped him grow to 5’6″, according to Barcelona’s website.

Essentially, when Barcelona’s sporting director Carles Rexach famously signed Messi with a contract on the back of a serviette, what he was in fact signing was a child prodigy who’d been playing with the genetic “handbrake” on. Once that handbrake was lifted, the result was a multiple Ballon d’Or winner.

An often overlooked aspect of all great dribblers of the ball is their combination of speed and endurance.

Research conducted by scientists from the School of Human Sciences at Liverpool John Moores University in the UK found: “Unorthodox modes of motion—running backwards and sideways, accelerating, decelerating and changing direction—accentuate the metabolic loading.”

Put simply, the unpredictable way in which Messi dances around opposition is arguably far more tiring than a straight sprint down the wing. The latter, of course, looks great on a statistic sheet, but doesn’t “accentuate the metabolic loading” like scientists propose Messi’s style of play does.

This is an idea supported by research published in the Research Quarterly for Exercise and Sport entitled “The Net Physiological Cost of Dribbling a Soccer Ball,” which concluded: “Dribbling a ball does significantly increase the energy cost and perceived exertion of motion, as well as inducing rises in blood lactate when performed at high speeds.”

“Blood lactate” refers to the lactic acid accumulation in the muscles—the burning sensation you feel during bouts of intense exercise—and is followed by fatigue and a reduction in performance. This again supports the theory a great dribbler of the ball must be gifted with speed and endurance in a football-specific context.

So, revisiting the nature vs. nurture debate surrounding Messi, could it be this part of his game improved far beyond anybody else’s due to his smaller stature?

Scientists from the Department of Sports Sciences at the University of Beira Interior, Covilha, Portugal, found that anaerobic power (essentially speed and power) was influenced by “30 to 90 percent” by genetic factors and peak oxygen uptake (endurance) was influenced by “40 to 70 percent.”

Therefore, it’s clear Messi was naturally gifted with endurance and speed, just not height and a good skeletal structure. But once this was hormonally corrected by Barcelona’s medical team, it’s possible the way “genetic factors” and “training” work together to produce elite performance—as described by the British Journal of Sports Medicine—had already worked in his favour.

This is, of course, all theoretical, but do you think he would have trained so hard on his dribbling, sprinting and endurance when in Barcelona’s youth setup if he was a 6’5″ beast? My guess is probably not, and the below video seems to support this idea.

This point might be highly contested, but based on the above research that shows dribbling puts high energy demands on the body, it’s clear a great dribbler of the ball is also an efficient dribbler of the ball. For this reason, articles like the one published in ESPN entitled “Stats Show Messi’s Lack of Influence” which states the following may be a little harsh:

Atletico won 1-0 on the night, to progress 2-1 on aggregate, and afterwards UEFA’s official game statistics showed Messi ran just 6.8 kilometres in the almost 95 minutes of play. This was only 1.4 km more than Barca keeper Jose Manuel Pinto and just over half of the 12.2 km ran by Atletico’s match winner Koke.

Again, to quote sports scientists from the School of Human Sciences at Liverpool John Moores University, “The distance covered by players tends to under-reflect the energy expended.”

So, is it possible Messi just understands the art of dribbling better than sports academics and statisticians?

As noted in the above video, former British sprinter Darren Campbell believes he loses the 25-metre sprint performed in a straight line due to his poor linear biomechanics. But it’s the same style that meant he was able to beat the Spanish sprinter in a 25-metre zig-zag test of speed and agility.

Essentially, footballers with a shorter running stride and lower centre of gravity are able to decelerate quickly, anticipate changes in motion and accelerate quickly.

While Ronaldo is obviously an extremely gifted sprinter and dribbler of the ball, he’s also over 6″ tall. Therefore, he’s had to adapt a shorter running stride and lower centre of gravity. To Messi, however, this low centre of gravity and natural agility was just inherited.

In summary, football is highly complex, and many would argue sports science is unable to methodically make sense of a player’s ability. But what’s clear in the case of Lionel Messi is unusual environmental and genetic factors all had a part to play in producing one of the greatest dribblers of the ball the game has ever known.